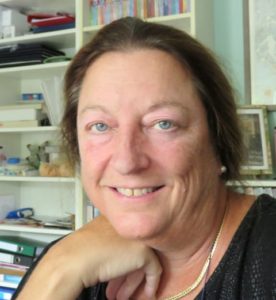 Kristin started her nursing career driving around the province of Antwerp to draw blood samples from patients at home or in the consultation room of their general practitioners.

Six month later she joined the new University Hospital Antwerp on the ward Endocrinology & Diabetology. 20 years later, she moved to the Diabetes outpatient clinic where the “Diabetes Convention” had just started; here she organised the education of hospitalised and ambulant patients.

Early in her career, she became a member of the Flemish Diabetes Association and of their “Education commission”. Later, she chaired this commission, which started the first “Diabetes educator course”.

She was a founding member of the “BVVDV” (Association of Flemish Diabetes Nurses) and chaired it for the first 6 years.

In the meantime, she became a member and subsequently Chair of the Federal Health Commission “Diabetology” that confers the official “Post graduate certificate Specialist Nurse in Diabetes”. As the Chair, she is a member of the Commission Nursing of the Health Authorities that rules on the accreditation of nurses with foreign certificates.

In 2005 she was elected to the Executive Committee of FEND, since 2014 she is the Chair of FEND and she is a trustee of FEND.